Simultaneous study of all complement responses – in one assay

Immuneed’s platform based on fresh, circulating human blood is unique in having an intact complement system. The complement system, which comprises around 40 small blood proteins synthesized by the liver, can cause or contribute to reactions that may occur during the infusion of a biological drug. To know your drug’s complete safety profile before entering a clinical trial, an assessment of complement activation is vital.

Complement activation starts a cascading immune response that stimulates phagocyte action, inflammation and membrane attack complex, which can have a role in multiple types of hypersensitivity reactions. These include reactions based on complement-dependent cytotoxicity (CDC), which can be prevented through antibody modification. But they also include reactions based on antibody-dependent cell-mediated cytotoxicity (ADCC), which is frequently overlooked. The latter can occur via the alternative pathway, which remains active even when the classical pathway has been blocked.

Preclinical trials should always look for complement activation – even if no activation is expected, as is often the case when CDC has been prevented. Our assay evaluates both the classical and alternative pathways, and it allows CDC and ADCC to be studied simultaneously. This has a further functional advantage, since the two mechanisms can block or complement each other. Studied together, they form a complete picture of your drug’s interaction with the complement system.

A study of complement activation levels 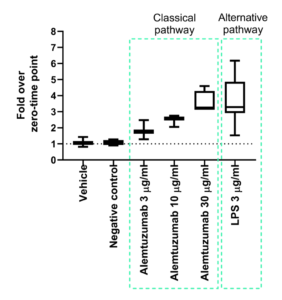 To the left you can view the results from our study of complement activation in circulating blood. Freshly acquired whole blood was incubated with complement activators alemtuzumab (activator of the classical pathway), LPS (activator of the alternative pathway) or negative comparators (vehicle/negative control) using Immuneed’s platform based on circulating blood. Complement activation (measured by plasma C5a) was measured at the 15-minute time point and plotted as fold-change over zero-time point (measurement directly after blood acquisition).

Request a quote or more information on complement activation.